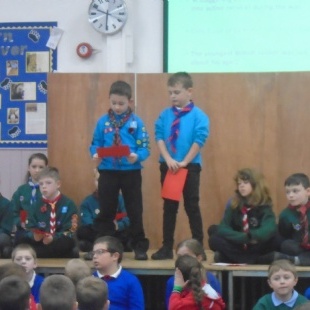 Beanfield Primary School students did a range of activities focused on World War One and the importance of Remembrance.

Beanfield Primary School students did a range of activities focused on World War One and the importance of Remembrance. During the school’s History Week, the focus was on the centenary of the First World War so students took part in a variety of cross- curricular activities across the school.  In Year 5, they used Philosophy for Children to discuss why it is important to always remember. They created their own poppies which were attached to a giant 100 display and also wrote their own prayers of thanks, some of which were read out in the Remembrance assemblies.

The assemblies were held in both Key Stages on Friday 9 November.  Mrs Freeman and Miss Wateridge enlisted the help of children from across the school to help to reinforce the importance of Remembrance.  Those who are members of Rainbows, Brownies, Beavers, Cubs and St John's Ambulance proudly wore their respective uniforms to show respect and to mark the 100th anniversary of the Armistice. Miss Wallington made the assemblies even more special by playing the Last Post and Reveille on her trumpet to mark the beginning and end of the silence. All the children demonstrated the value of respect during both assemblies.